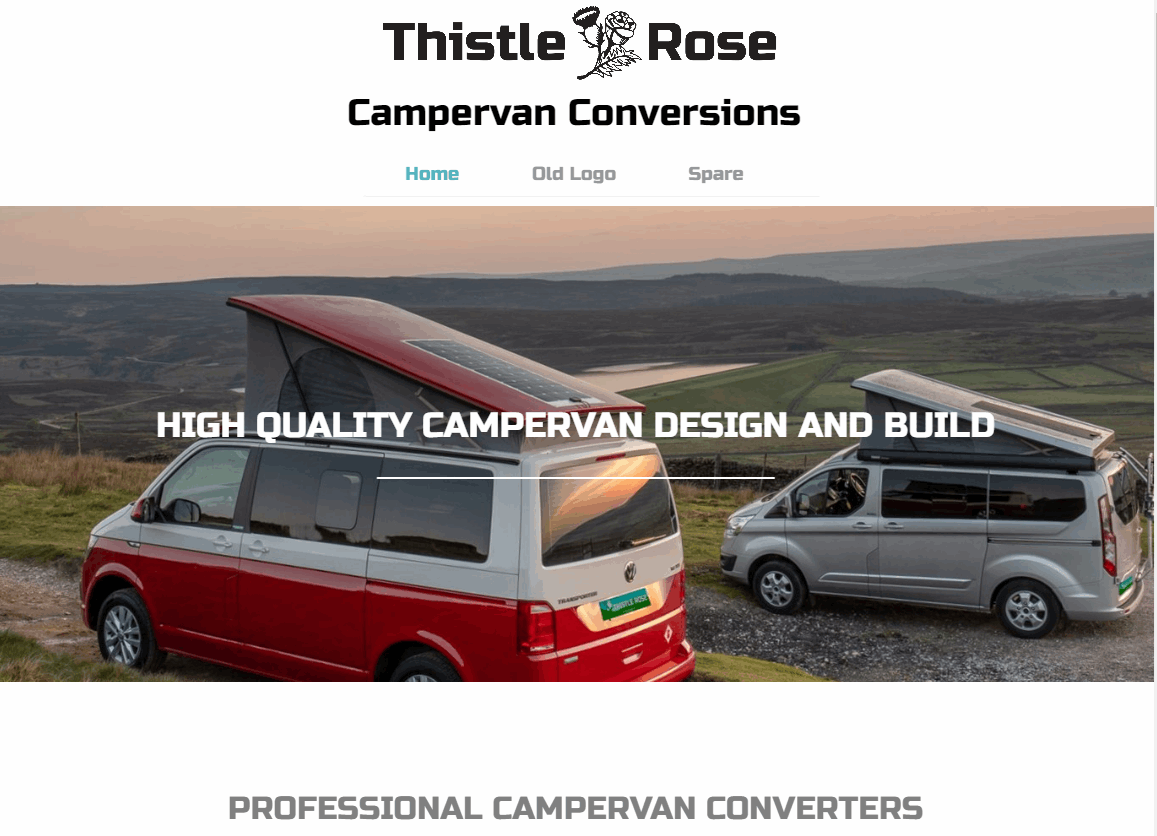 Published by Jonny Sainsbury in Camper Configuration · 27 May 2022
The key differences between the makes and models we convert
Origin stories of the first campervans vary depending on who you listen to. Some argue that the first was Dormobile in 1956 which was essentially a van with a bed in the back. Others that Ben Pon marked the idea in 1947 who had the idea from motorised trolleys in a Volkswagen factory, resulting in a sketch of a Beetle based van. Today Volkswagen is perhaps looked at as the industry leader in campervan manufacturing, but being a larger company has its drawbacks. Predominantly in that in order to be financially profitable, all campervans are made to the same specifications. Yet if you want a campervan which reflects a style and specifications to suit your own needs, with the fittings you desire, that’s where we come in here at Thistle Rose Leisure in Skipton.
Who are the main manufacturers in the campervan world?
Volkswagen of course by far stands out, but there are many competing campervan manufacturers. The downside to being a manufacturer is that in order to be profitable, they have to stick to a strict set of specifications that prohibits them from changing designs, particularly of the interior in order to comply with the VCA (Vehicle Certification Agency), much like the car industry. This can lead you to paying for specifications such as solar panels that you may not decide to use. Conversely with conversion companies, you can decide on so much more, as well as being economical with your budget.
What are they key differences between a conversion and dealership camper?
As with cars and other motor vehicles, the cost of doing business with a dealership is always going to be higher. For clarity, in this case by dealership we mean the used campervan market. Due to the taking of a commission being their primary way to make money, dealerships will often overlook potential issues with a DIY conversion, in order to make a profit. There is no quality assurance. Further, dealerships may be able to accumulate a convincing level of knowledge to sell you the vehicle, but lack the in house knowledge, specifications and compliance procedures that a professional campervan conversion company has. In short, dealerships sell campervans, whereas campervan conversion companies re-design and build them. The exception to this is obviously the manufacturers we mentioned previously such as Volkswagen, but their California model for example typically sells for a hefty £85,000.
Cost of conversion vs dealership camper?
Manufacturers such as VW and Ford, you’ll typically find campervans ranging from around £75,000 to £85,000, for the Nugget and California for example. This compares to £55,000 to £60,000 maximum if you went down the route of buying a van and getting it converted. In our view, by far the most economical and safest way to drive away a campervan is buying a new or used van, and then getting it converted by professional conversion company.
Makes and models we commonly convert
Our most popular models that we convert are Volkswagen Transporters and Ford Transit Customs. This is because for most people’s requirements they offer all the space needed, as well as being practical enough to use as a main vehicle. Both are around 5 metres in length, and both within 2 meters wide, meaning these vans don’t feel clunky to drive, so going from driving a standard family car to a T6.1 or Transit Custom is relatively seamless. There are subtle differences in the designs that make a difference in how they work as a camper, the VW is curved slightly towards the top, whereas the Ford Transit Customs are squarer in shape, which makes the Transit feel slightly more spacious on the inside. The layouts of the two vans are pretty much interchangeable due to their similarities in shape and size. There is one subtle difference in that the Transit comes with a usable high roof version which then gives us options on things such as toilets. 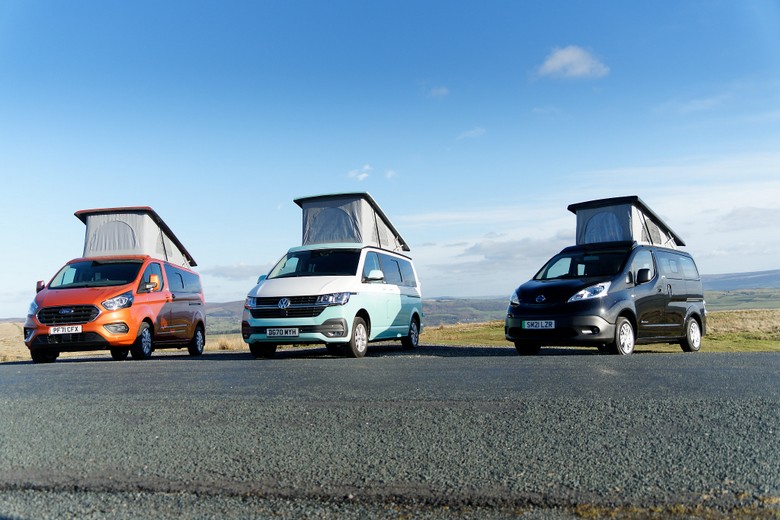 In terms of the larger vans we convert, such as the Peugeot Boxer and Citroen Relay, these do offer much more space inside. So, for people who have requirements for a toilet and shower for example, these are good options, as well as people who might feel they will suffer from being claustrophobic in a smaller environment. Obviously, you have to weigh up the pros and cons of more space vs driveability, useability and fuel economy. 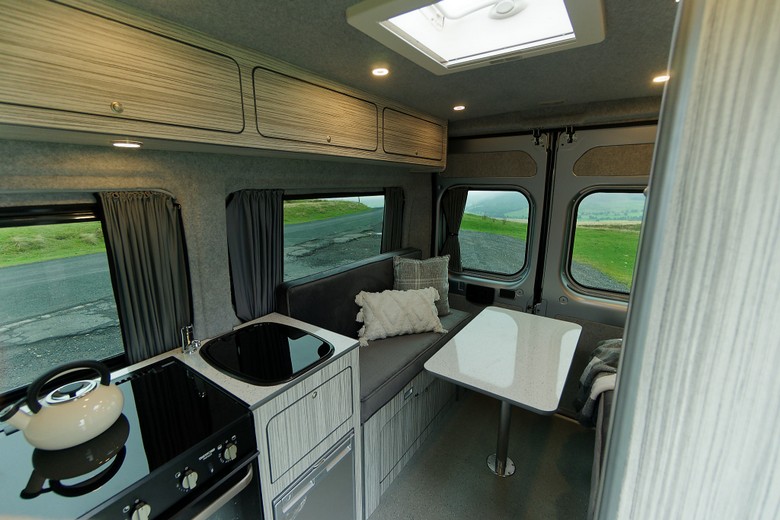 Then we turn our attention to the smaller vans, or Micro Campers as they’re sometimes referred to, such as the Nissan NV200. Often people will opt for a smaller van simply because they don’t want a bigger vehicle. Perhaps if they’ve been used to driving small hatchbacks all their life, and the thought of then driving a medium or large van isn’t something that fills them with joy.
Another reason why more and more people are opting for our micro Nissan based camper is that it is the most practical all electric camper when in its eNV200 form.  With a useable range around 120 to 160 miles, the green credentials of this micro camper make it stand out as a unique, practical alternative to internal combustion engines.
Models for different needs
Typically, we find that the main reason you might choose a model on a needs basis is for mobility. Here some of the larger vans work better, both in terms of providing more space but in that it also allows us to make more adaptations so your time away is more enjoyable. Larger vans that are converted are also more popular for including your own toilets which can give you peace of mind if further outbreaks of COVID were to arise, or if the thought of heading off to the toilet blocks on campsites in the middle of the night fills you with dread! You might be inclined to think that larger vans such as the Peugeot Boxer and Citroen Relay would be more popular for families with children, but from our experience the T6.1 and Transit Customs are perfectly adequate for use with children as the majority of the time they’re keen to get outside and start playing as soon as possible! Also if you use a drive-away awning (which we highly recommend), the kids tend to use that as they’re area.
Thanks for reading,
Until next time,
Team Thistle Rose Leisure